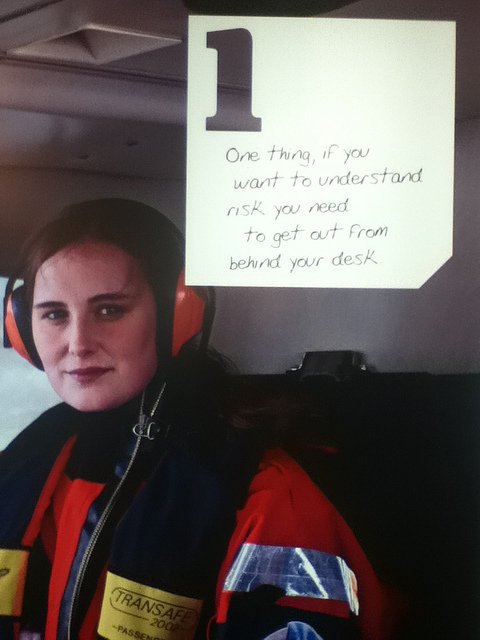 I saw this poster in an airport some time ago. It is an advert for an insurance company and shows a person in a helicopter with a note, “One thing, if you want to understand risk, you need to get out from behind your desk”.

How connected are safety specialists with operational staff and the operational environment, where the day-to-day safety is created, to understand the operational world? How much of our time is spent behind a desk or in meetings? In every industry, there is a danger that those working at the blunt-end (in any role) become detached from those in the sharp-end of operations.

Some years ago, I was part of a major project involving a change to a new facility along with several other changes. I entered the project at a relatively late pre-operational stage – everything was designed, built and mostly installed. The operators were training for the change. The risk assessments, including human factors, had already been done and were exhaustive, comprising hundreds of pages of documentation from workshops and analysis. After reading some of this material, I could not get a real sense for what was going on. The only way I could see to understand the change was to to enter simulator training for a week and just watch and listen.

I was shocked at what I experienced. What I saw was that the operational staff were not ready for the move, despite what management and various specialists believed. Being with them, watching them and listening to them allowed for a moment-by-moment empathy of the operators’ experiences (process empathy) and a near understanding of their worlds (person empathy). The operators could use the equipment, but they could not do the rest of the job safely at the same time. Some lost the picture, unable to continue. Some broke down crying. Operational staff had already spoken up, but the message wasn’t getting through.

Nothing in any analysis could give anything like this understanding, because it was just that – analysis; work-as-imagined, decontextualised, decomposed and detached fromthe reality of work-as-done.

As I arrived home after the fourth day in the simulator, all I felt I could do, as a safety specialist was write honestly and openly about what I saw. So I wrote a letter in the late hours of the night. The next day, I went in to the facility to try to talk to someone about what I had seen, as a newcomer and outsider to the project since the Monday. When I arrived, I read the letter to the project and facility safety manager. Then I read it again, with the safety managers, to a senior manager, then again to the facility manager and several senior project and facility staff in an impromptu meeting. While there was some resistance, most listened and understood, and agreed to look into it further.

But there was some resistance to this unorthodox approach and, quite rightly, I was challenged. I could only think of one question in reply: “Have you been into the simulator recently?” What was most surprising to me at the time was that none of the (non-operational) managers or specialists present at the impromptu meeting had spent time in the simulator during training. There are many reasons why sitting in a simulator with operational staff does not seem like a priority on a large project, but among them are safety regulations and safety management systems. The need to comply with such requirements may seem like a very good reason not to bother getting involved with operational issues. Ironically, both can take the focus away from the sharp-end of safety. Because time and other resources are always limited, there has to be a trade-off. The trade-off often favours safety-as-imagined, as opposed to safety-as-done.

In the weeks following, it was decided to delay the opening of the new facility to allow for more experience in the simulator and the new facility. During this time, two or three big human factors issues (including a significant risk associated with display design)were identified from informal discussions and observations. These issues were resolved during these months. The facility opened successfully a few months later.

Before this experience, I had spent most of my time in this organisation behind a desk, with little access to operational environments or staff. From that position I could identify risks, but could not really understand risk.

The message in the insurance poster reminded me of this experience and has been a sort of mantra ever since:

If you want to understand risk, you need to get out from behind your desk.